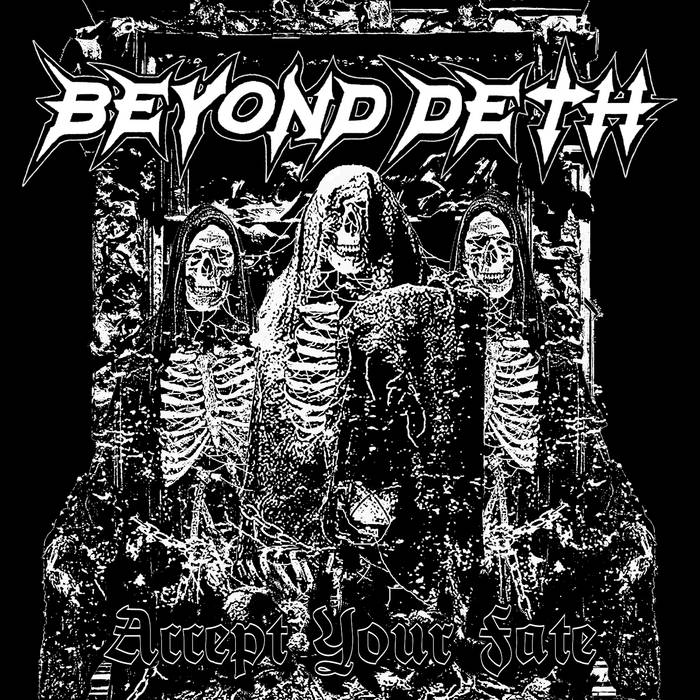 stevensue superb trash/death metal, try not to run around like a hyperactive child when listening to this. great album Favorite track: Live Again.

Metallurgical Fire I thought Shards of Humanity had the catchiest death metal record of the year, but Beyond Deth has given them excellent competition with this album. I have Accepted my Fate, which consists of listening to these riffs as much as possible. When you can make one guy think of Lamb of God and another think of Immortal on the same album you deserve some credit. Favorite track: Servants.

Ben B That rolling Drum & Bass beat just gets ya going. Headphones in, walking among the masses kinda music. Favorite track: Endless Repent.

"For the last decade, Chicago’s Beyond Deth has taken the most tolerable qualities of modern extreme metal and thrown them into a heavy musical stew. It’s hard to pinpoint this band because there really is a little bit of everything to their sound (black, death, thrash, etc). Back in the early/mid 2010s, I viewed them as the local scene’s answer to Skeletonwitch who utilized the same approach. Unfortunately, Skeletonwitch has since moved on, jumping the Lords of Chaos bandwagon and sounding like a third rate Watain in doing so. But Beyond Deth continues to genre bend and does so at full force on their second album, Accept Your Fate.

Thrash lies at the root of Beyond Deth’s sound as heard on the opening track, “Live Again”. It features black metal touches like tremolo picking and blastbeats, but not to the point of overwhelming the song. These influences are scattered throughout the course of the album. They do a great job complimenting the thrashing rhythms and guttural death metal vocals of frontman Jon Corston. With such a fierce and brutal delivery, it’s no wonder Corston was asked to sing for death metal veterans, Disinter.

The only songs on the album that don’t do much for me are “Servants” and “Endless Repent”. They’re not bad songs per se. Quite frankly, the playing and production are as impressive as the rest of Accept Your Fate. They just veer a little too close to the groove oriented sound of Lamb of God for my taste. If you appreciate this style, you’ll love them.

The final three tracks sees Beyond Deth going for the jugular. The one-two punch of “Macabre Delights” and “Kill the Weak” is a twin assault; the former a violent neck breaker and the latter striding the line between thrash and mid tempo death metal. The title track closes the album with Mustaineian (new terminology alert) riffs and solos circa Rust in Peace (1990). What better way to round out an extreme metal potpourri than with a nod to one of the style’s forefathers? Whether this influence was intentional or not, it’s certainly welcomed.

Accept Your Fate takes me back to a simpler time when Mayhem Fest was a thing and my main outlet for discovering new music was the Music Choice metal channel. It’d be cool if more bands were open to such musical hybridization, but chances are they wouldn’t be able to do so as proficiently as Corston and company. Accept Your Fate is indeed a “macabre delight”. "
-Defenders of the Faith Metal